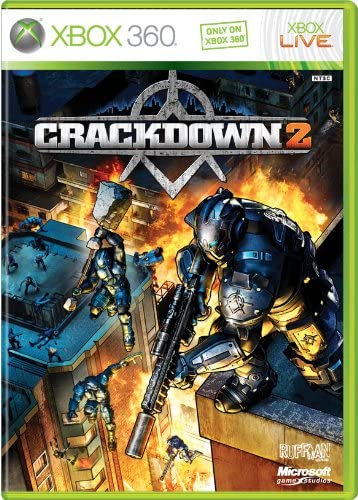 Crackdown 2 is the sequel to Crackdown and it has the same third-person shooter gameplay set in an open world. The story picks up ten years after the events of the first game. Pacific City is in ruins and it is overrun by mutant freaks. The player controls Agent, a member of the city-funded Agency that maintains order. The mutant freaks are backed by an anti-Agency group called the Cell and they turn into a heavily-armed terrorist group. Most of the goals in the main campaign are centered around holding ground, fighting the mutant freaks at night and the Cell during the day. The story itself is generally furthered through audio logs that can be found by exploring the city. Much of the action is over the top, with huge explosions, massive amounts of enemies and the ability for Agent to juggle cars and cause much chaos. He can also drive many vehicles and helicopters. In the original game there was a set of three cars that were modified with each level-up. This has been replaced by offering a new vehicle for every new level reached. Most of the game is set in the streets of Pacific City where the player can freely explore, move to the rooftops or go underground to raid the lairs where the mutant freaks are hiding during the day. Underground, sunlight becomes the most important weapon. Once the absorption units guarded by the Cell have been recovered, sunlight can be collected to power beacons that deflect light into the lairs, tearing through the mutants that only survive in darkness.