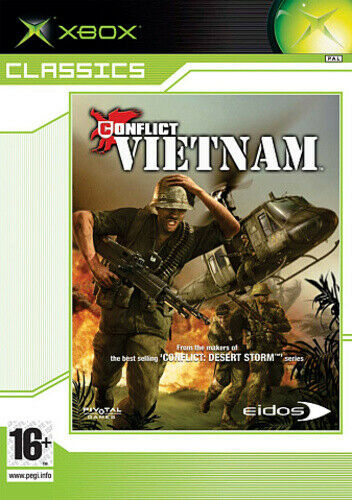 Conflict: Vietnam is the third game in Pivotal Games' Conflict Series this time taking you further back in time to the bloody battleground of Vietnam. The game is set during the Tet offensive in the year 1968. You take over the role of four soldiers who aren't, contrary to previous games, elite S.A.S / Delta Force soldiers. In fact, they are normal American G.I. who are separated from their unit during battle and have to fight themselves through enemy territory with hordes of hostile Vietnamese. You can issue orders to every member of your squad or directly take control over one of them. In every mission you have one or more main and several bonus aims like destroying all tanks in the area or collecting Vietcong documents. For each achieved objective, killed soldier or destroyed vehicle your soldiers get experience points. Each soldier has different abilities (Sniper, Leader, Heavy Weapons, Medic) which can be improved with these points. To defuse one of the numerous booby traps it is necessary to have skills in that ability.