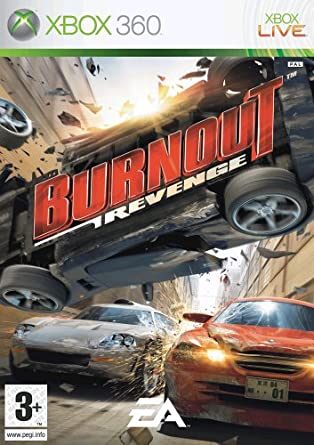 The fourth Burnout racing game puts you once again in the eye of traffic storms, where you do not only rush to be the fastest, but brutally, yet stylishly, take down your opponents. This is emphasized by impact time, which shows crashes in all their slowed-down glory, and the boost you receive after a successful wrecking. Reckless driving bumps your Revenge rank, unlocking new events. This can also be achieved by medal placings that grant new vehicles. Collectible signature takedowns, crashbreakers (detonate your vehicle, now also in some regular races) and aftertouch for precise havoc remain, but one of the major changes is the ability to check traffic. Non-racing vehicles are no longer a nuisance with the sole purpose of slowing you down. They can now be actively used to obstruct traffic or send them into your foes. The Road Rage mode (take down a set number of rivals within a time limit) and Crash mode make a return, but Traffic Attack is new - race against the clock and level the traffic at the same time. Other modes include regular races, grand prix races, Burning Lap (high-speed time attack), Eliminator (last one after each round is out) and a normal time attack mode. In the Crash mode, the multipliers and bonuses have been removed, and you cannot drive at full speed towards a crossroads. You have to time your start to receive a proper boost and then it is only about steering, crashbreakers and aftertouch. There are many new tracks and cars, a soundtrack with lots of famous artists, and a new world tour in different countries.