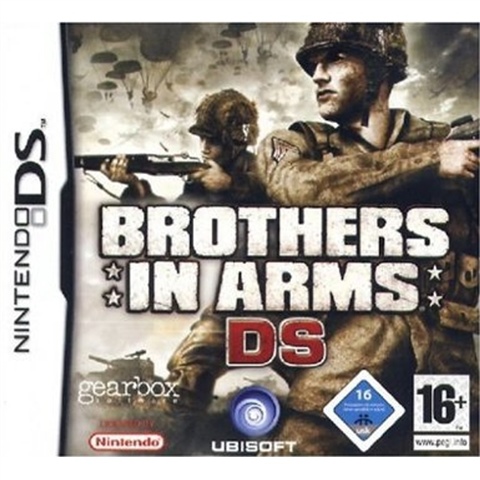 Ever wanted to travel the world, make new friends and face great challenges? Then you should join the army, son! Of course, you'll also have to shoot people, lob explosives at them and (possibly) drive tanks over them. Your Granddad remembers a time, however, when all the above was done in the name of king and country. It's this conflict that Brothers in Arms DS drops you into (although, admittedly, it's more like truth, justice and Mom's apple pie/the American Way). You inhabit the fatigues of Sergeants Baker and Hartsock in the war that turned out not to end all wars. You'll be required to fight Nazis wherever you find them, since the action takes place over three campaigns, spread across North Africa, Normandy and Ardennes. The action unfolds in the third person, making innovative use of the DS touch screen. While movement and shooting are assigned to the DS's D Pad and shoulder buttons, use of grenades, reloading and taking cover all use the touch screen and stylus. The game takes a break from the DS norm in occupying three (count 'em) dimensions. Also featured is a multiplayer function that allows you to get stuck in with three of your mates in modes that include Deathmatch and Team Deathmatch. Just think, if they'd invented the DS 70 years ago, your Granddad could have played Brothers in Arms DS while he was out there getting mucky and fighting Nazis!