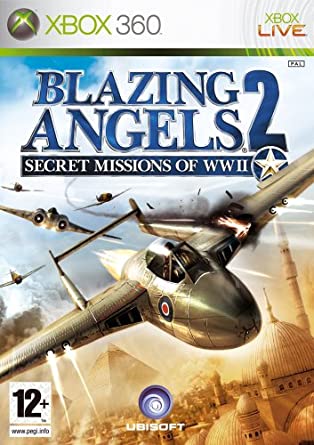 Blazing Angels Secret Missions shows World War II from a different perspective - that of an elite pilot who is part of a secret team. In the game, the player will undertake some of the most dangerous missions in exotic locations all over the globe. As an elite pilot, the player goes from one great adventure to another, while battling the most lethal experimental weapons of the Third Reich. The squad's mission is to prevent the ultimate weapon from being built. To help players in this quest, they have at their disposal an assortment of highly experimental aircraft and weaponry. Blazing Angels Secret Missions comes straight out of the history books of World War II's most top secret projects. Key features of Blazing Angels Secret Missions include: Living, Breathing World - Built on all-new, cutting-edge visual technology, the world of Secret Missions is more believable and involving than ever. Fly above hills and mountains, navigate through treacherous mountain passes and dogfight in the clouds with enemies. Take part in large-scale battles through various conditions: darkness, rain, snow, and air turbulence. Diverse and Unusual Scenarios - Secret Missions takes players around the world, from Paris, Rome and Moscow to exotic locations like Rangoon and Cairo and the highest mountain ranges of the Himalayas. Each mission will bring its own surprises, twists and unique challenges. Prototype Technology - Players will have access to some of the most advanced and unusual aircraft and weapons of WWII, as well as access to a huge assortment of weapons, including high-velocity cannons and early guided missiles. Fast Paced Multiplayer Action - Multiplayer features free-for-all, co-op and squad-based play, including the brand new Capture the Flag and Epic Battle modes, the latter pitting two teams of players against each other in a large-scale battle with conquerable bases and objectives that can be destroyed in order to gain the upper hand on the opponent.