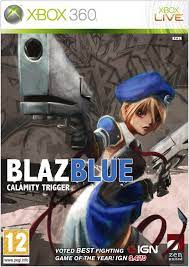 BlazBlue has been rocking the Japanese arcade circuit for a long time - since 2007, in fact. But finally, fighting fans in the West will get to experience the gothic 2D battler that has taken the East by storm. From a distance, it looks and plays like many other fighting games before it, with high definition graphics detailing each combatant with awesome digital flair. But the game is specially designed to be easy to pick up for beginners, with combos losing power with each consecutive strike to allow for counterattacks, and a simple button system. Each character has a weak, medium and strong attack, along with a unique technique called a 'Drive'. The four moves are also known as simply 'A', 'B', 'C' and 'D'. Building up a 'heat meter' at the bottom of the screen by dealing and receiving attacks will allow you to execute devastating 'distortion drive' manoeuvres. But the beauty of BlazBlue isn't just in its simplicity. For hardcore fighting fanatics, there's a depth of play that will satisfy, with two different guard blocks for varying situations, 'Rapid Cancels' for whenever you want to stop mid-animation to throw your opponent off and 'Ukemi Tactics' to really use some strategy. And because we've been waiting so long for the game to hit our shores, this release of BlazBlue: Calamity Trigger comes with a heap of additional content - including new music, an online multiplayer mode, a story mode specifically for the console version and 'unlimited' forms of various characters.