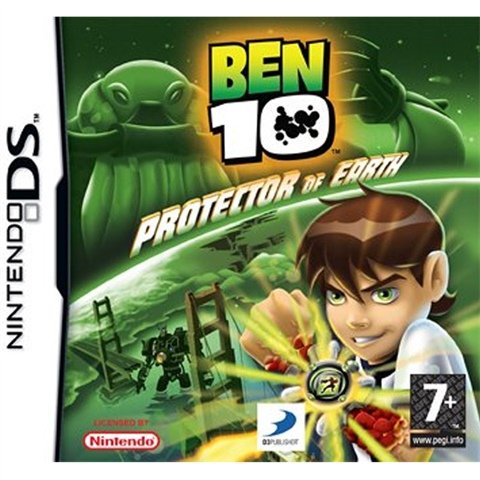 At first glance, 10-year-old Ben Tennyson looks like your average, everyday kid. But take a closer look, and it's plain to see he's the world's youngest superhero stopping evil-doers from Earth and space. In Ben 10: Protector of Earth, players take on the role of Cartoon Network's popular hero Ben 10 and, using the power of the alien Omnitrix device that has attached itself to Ben's wrist, become the only everyday kid to take on super powers and change into alien forms as they save the world through the game's diverse challenges, puzzles and skirmishes. In Ben 10: Protector of Earth, the evil Vilgax, with the help of Kevin 11 and the Forever Knights, has set in motion a plan to capture the Omnitrix and the world is in danger. The game authentically portrays these main characters and others from the show, as well as Ben's most popular alien forms and a familiar summer vacation storyline. All this, along with loads of brand new content, immerses players in Ben's world like never before. The game is easy for novice players to pick up, appropriately challenges and rewards young gamers, yet offers a wide variety of powerful action choices that make it exciting enough to engage players of all levels for hours at a time. Ben 10: Protector of Earth challenges gamers to embark on an exhilarating and crucial quest to stop evil Vilgax and save the day.