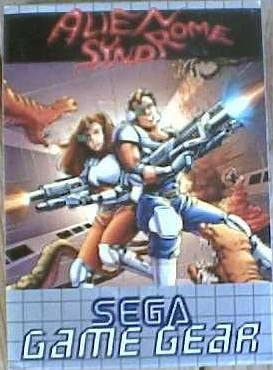 Alien Syndrome for Game Gear is a sequel to the arcade game of the same name. Five years after the events of the original, alien hunters Ricky and Mary are called back into action when a distress call from the space transport Dagal is received. More alien creatures have invaded. They need to be destroyed and the crew rescued. Gameplay is very similar to the original game: players select either Ricky or Mary (the difference is only visual) and must clear the levels (seen from an overhead perspective) by rescuing all crew members within a time limit while fighting off aliens. A map can be called up at any time to check where the crew members are. Panels in the walls reveal weapon power-ups, including lasers and flame throwers. Rescuing the last crew member opens up the exit. Upon leaving, a boss fight follows. The game includes five different levels, four of which represent decks of the invaded ship. All are completely new designs not seen in the original game. Certain enemies are reused from the arcade, however, including most bosses. The final level consists solely of a boss fight against a new alien.